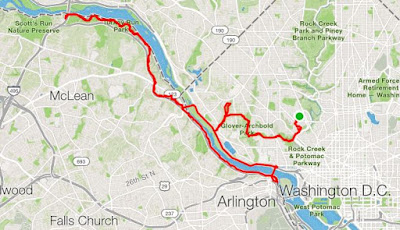 Today was the day! It had finally come. Sunday, October 29th, 2017. The VHTRC Potomac Heritage Trail 50K. My A-Race for the year. ... And I was ready! Anything less than an outright victory would be impossible to bear.

I had just completed a spectacular training block, having peaked 3 weeks prior with a killer training run at The Grindstone 100. Now, 100 miles may have been a bit ambitious for a training run in advance of my key race for the year, but after nearly 30 months of ultra running I'm basically an elite athlete, so I knew my body could handle it.

I caught wind a few days earlier that all of the elite competitors -- Jim Walmsley, Hayden Hawks, Zach Miller -- were bowing out. I knew, then, that the race was already mine for the taking.

But ... I wanted to make sure everyone else had a fair shot at competing, just to spice things up a bit. That was the theme of the day.

My 7 month old son woke up a dozen times the night before, to ensure I didn't feel well rested. Thanks, buddy! Then, instead of leisurely jogging to the race start -- at a rando house in Woodley Park ... totally sketch -- I decided to press my time by making homemade biscuits before tearing ass out of the house and borderline sprinting the 3.5 miles across the city and up the fabled Klingle Climb to arrive at the starting line at the last possible moment. Moreover, I further handicapped myself by loading my race vest down with 100oz of liquid, and then only planning to consume half my usual calories for the race. You're welcome, competition!

I knew that race day conditions were not ideal -- the course would be covered in slippery rocks and leaves. A course record was likely out of the question. The race started, rather unceremoniously for such a high profile event, around 8am. I opted to hang back with the front runners instead of showing off ... mind you, this had nothing to do with my navigational ineptitude and complete unfamiliarity with the roads and trails in the early miles ... instead, I simply wanted some of the other runners to feel like they had a shot at fame and glory, too.

We travelled at the most pedestrian of paces through roads, alongside Rock Creek, through Dumbarton Oaks and Glover Archibald Park, eventually arriving at AS1 in Battery Kemble Park (well behind course record pace, I might add). Now, the PHT 50K is unusual in that some runners can receive "bonus time" that improves their official race finish time. This occurs at aid stations, where runners can elect to perform any variety of physical tasks (push-ups, break dancing, ...) or consume gastronomical monstrosities (peanut butter and hot dogs, Gatorade, ...). I'm a real runner, so I didn't waste my time on such activities. But I did make sure to stop at AS1 for a moment to put on the appearance of being a full-fledged fun-loving Happy Trails member. In all honesty, I was afraid that if I just flew through the aid station I'd receive a time demerit or something ridiculous like that.  When the Happy Trails Figurehead Emeritus, Keith Knipling, departed I knew I could finally leave without consequence.

Onward we jogged to the tunnel underneath Canal Road, popping out on the C&O canal moments before a road-runner-tacular half marathon was about to start. I elbowed, shoved, and kicked my way through the throngs of overdressed participants for what felt like minutes, until finally the wide-open canal towpath lay before me. I seized the opportunity and made my move. Let the race begin!

Two victims fell into my trap and followed suit as I accelerated to nearly Boston Qualifying pace. We progressed down the canal and over the Key Bridge to the start of the race's namesake trail. They loitered at AS2, filling up their handhelds, as I continued on with my ~5.2lbs of liquids strapped to my back and chest. At one point I feared I had built up such an unfair lead that I chose to depart the trail and answer Nature's call for a few minutes. As I had hoped, the two runners ran past. I was no longer in the lead...

... But I was not afraid. I had sized up these other runners and judged them to be PHT n00bs ... I had a feeling they'd quiver at the site of the upcoming Gulf Branch rock scramble and waste time seeking out an easier path along the river bank. And that's exactly what happened! I began the rocky climb just as they were returning from their fruitless foray. The lead was mine again!

... But wait, what's this?! After the rock scramble, I dutifully stayed on the unnecessary switchbacks of the trail, while the other two cheated by blasting up a shortcut "trail". For shame!!! No matter, though. A few minutes later I recaptured my rightful place at the front of the race!

Onward I labored, up to AS3 at Chain Bridge, past Fort Marcy, and through Turkey Run Park and AS4. Each time I came to an aid station I stopped and briefly chatted with the volunteers, again, for fear of receiving time demerits if I simply ran on through.

When I approached the turn-around just after Mile 18 at the American Legion Bridge, I stopped to assess my competitive advantage. I heard no one. I saw no one. I was fresh as a daisy. This simply was not fair to the other runners. I observed that there were no signs, nor was there any flour on the ground indicating a turnaround point. So, instead of turning around "at the bridge" (according to the Turn Sheet), I continued on ... under the bridge, up the steep climb to the top of the bridge (Strava Top 10 effort!), and then back down to begin my return journey.

Moments later, I came across 2nd place, still heading outbound to the bridge. I cheerfully informed him that, with my impromptu hill climb, I had been kind enough to let him close the gap by nearly 5 minutes. A mile or so later and still feeling generous, I kicked a rock and slammed to the ground (bye bye big toenail), with the presumed intent of jarring loose my last Huma gel from my pocket, thereby sending me further into caloric deficit at later stages of the race. Yes, I was doing everything I possibly could to level the playing field. It's the least someone of my running caliber can do for my less capable "competitors".

Arriving back at AS4, I loitered briefly so that I could be admonished by volunteers for not consuming their PB&Js. Later, I selflessly broke out of my hyper-efficient stride so that I could respond to Gary Knipling's desperate request for a fist bump -- it's the little things us young, talented folk do that can make a slow, old dude's day.

On my way back to the Chain Bridge aid station, I briefly observed the beauty of Pimmit Run, with a light fog dancing above the babbling water. But I dared not look more than once ... this was a race! I returned my focus to the trail with laser-like precision, guided by the immortal words of Queen: We are the champions ... of the world! Indeed, Freddie Mercury! On this day, I would be the champion!

I proceeded across the bridge and onto the canal. At this point, all of my competitive handicapping was paying off. My quads were tightening. I was unable to achieve my marathon pace on the pancake-flat towpath. My focus was fading from the caloric deficit. Doubt crept into my mind. What if I can't do this? For what felt like hours (8 minutes, to be exact), I wrestled with my existential crisis -- If you can't win the PHT 50K, why bother running at all?

Finally, Gloria Gaynor's angelic voice echoed inside my mind -- I will survive! I snapped out of my funk. It was time to put down the hammer and win this race. I deserved the glory!

I maneuvered through the Canal Road tunnel with the speed and grace of a drunken three-legged cat, and began making quick work of the remaining miles of the race. ... But the work was quick, almost too quick. Every few minutes I would slow down to search for the yellow flour markings that littered the course route -- not because I didn't know where I was going, but because I wanted to give my competitors a chance to catch up.

... But even that wasn't enough. So I ingeniously tried playing soccer with a rock firmly planted in the ground (bye bye other big toenail). It worked to perfection! I flew through the air ... landing, sliding, and coming to rest along a stretch of the partially exposed concrete water pipes upon which the Glover Archibald trail is built. Crimson blood poured out from my knee and forearm. I took my sweet time getting back up. All in the name of sportsmanship!

As the end of the race neared, I found myself along the bank of Rock Creek, a simple turn away from pavement. I halted, scanning the ground and every nearby tree for a semblance of yellow flour to point the way. I knew where to go, mind you, I just wanted to make sure it was obvious the other runners would be able to figure it out, too. I made up my mind to forge on ahead to the road in the distance. Then I spent the better part of 15 minutes (okay, 1 minute) trying to decipher the tattered remnants of my Turn Sheet. Yup! Confirmed! This was the right road. Of course! I knew it all along!

As I proceeded through the neighborhood streets and up the final mountain-like urban climb, I slowed to nearly a crawl -- so that I could mentally reflect on my accomplishment, not because my legs were tired or anything like that.

Now, Queen again: I want to ride my bicycle!

When I came upon the finish, I chose to entirely overlook the house I was at less than 5 hours prior, and instead, with purpose and clear intent, jogged all the way to the end of the block. I really meant to do that, I swear! After a quick 180, I came up to the door, stopped my watch, entered the house, and jotted my time down on the sign-in sheet ... 4:57:10 ... because, yes, those 10 seconds matter.

As you might expect, I was greeted with tremendous applause and fanfare, the likes of which few have ever had the pleasure of experiencing:

"Did anyone get here before you?"

Though the result was a foregone conclusion, that does not lessen the greatness of my accomplishment. It was a monumental achievement. I won the 2017 Potomac Heritage Trail 50K! A performance worthy of the history books, no doubt.

And for my reward, an ice cold Dogfish Head!

By the time I finished my cool down jog back to my neighborhood, word of my incredible achievement had spread like wild fire. No less than 3 companies had already contacted me to discuss sponsorship opportunities. A well-deserved storybook ending for yours truly!